On December 16, 1967, five adventurous boys from one of the islands elite’s high schools, Jamaica College, set out into the majestic Blue Mountains in search of a mythical trail endeavouring to reach its highest point, the Peak, at elevation 7402 feet. They never made it.

After almost ten days in heavily forested terrain described as 'inaccessible as any place in the world and perhaps where man has never trodden', they found themselves hopelessly lost, trapped and far from a living soul. Cold and starving they probably had hours to live.

A platoon of soldiers dispatched to the area where it was believed that the boys had accessed the Blue Mountain Ridge reported that ‘the boys were never there or had vanished into the jungle’.  They turned back.

This is the story of the harrowing journey that would make headlines and test the character of five boys as they faced down death on their way to manhood. Using eyewitness accounts, maps and never-before-seen photographs taken during the actual ordeal, the author tracks the action from an innocent plan hatched during Christmas break to the dramatic, last-ditch efforts to rescue the boys.

In 1967, Geoffrey Haddad was a curious Jamaica College student with a passion for the outdoors. He was one of the five.

NO CELL PHONES, INTERNET OR GPS, ALL THEY HAD WAS THEIR WILL TO LIVE 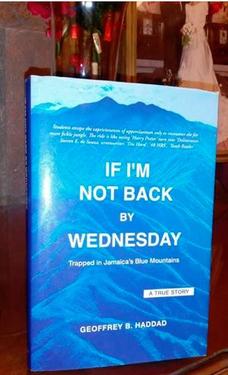 "As he got ready to aim his highly maneuverable craft back to Kingston, Jack Tyndale-Biscoe’s heart was sinking.  He felt he was out of time and good skies; in a little while, he’d have to land with no news of the year’s five most wanted persons in Jamaica."